When I’m outside in early spring, I find myself not so much longing for the sight of something green as lusting after the color yellow. The rich yellow on a Meadowlark’s breast, the goldshine of Dutch Master daffodils, the chalky yellow of Forsythia flowers—these slake something so strong that it feels like a physical need, a thirst that’s built up inside me all through winter’s greyness.

But maybe nothing satisfies that thirst better than Bloodroot, a wildflower native to eastern North America, with its stand-up yellow stamens surrounded by the brightest of white petals. My first sight of Bloodroot in March or April is always a shock. The colors are so perfect, they contrast so radically with the dead forest floor, that the flowers seem to have an artificial quality, as if they owed their brightness to an electrical charge.

All colors speak to us, even though their language may be mute. What Bloodroot says, once its flowers open, is this: “Spring is here now; the waiting’s over.” Even its scientific name, Sanguinaria canadensis, affirms this message. It’s the sanguine or hopeful flower, the one whose appearance assures us that winter is finally finished, that warmer days and brighter sights are imminent.

I found a patch of Bloodroot about a week ago when I was walking through Todmorden Mills Park in Toronto’s Don Valley. The park contains a nature preserve of nine hectares (22 acres) that has several different habitats, including wet and dry meadows, a swamp, and an upland forest. Over the years, the park curators have made an effort to cultivate native plant species and to eradicate invasives.

On the day I visited, the whole park seemed dead, still gripped by winter. No snow on the ground, but not a trace of green either. No butterflies, no dragonflies or moths, and no birds flew through the leafless treetops.

It wasn’t till the end of my walk, just before the trail came out of the woods and gave onto a groomed lawn, that I spotted a sign of life. Right beside the trail, on the soggy forest floor, I could see a patch of white. When I came closer, I realized I was looking at a swath of Bloodroot in full bloom. The effect was much like reading the first line of that E. E. Cummings poem on April: “When faces called flowers float out of the ground.” As these faces floated up, they attracted other forms of life—the whole area was alive with bees.

These were native bees that hovered around the flowers, not the imported honeybees. Bloodroot doesn’t produce nectar, but the stamens are coated with pollen, and this is what excites the bees. The first type I could see, and the most numerous, was a species of Mining Bee (genus Andrena) with a dark abdomen and hairy face. The second kind was a type of Small Carpenter Bee (genus Ceratina) whose abdomen had the same lovely green color that you find on oxidized copper.

At one point, I also noticed a large Carpenter Ant crawling on a log next to the Bloodroot. While bees conduct their business above ground and in plain sight, the fascinating symbiotic relationship that exists between ants and Bloodroot unfolds for the most part in complete darkness.

Even though Bloodroot spreads through its root system, the flowers also produce seeds that come with a fleshy organ called an elaiosome. Ants collect the ripe seeds and bring them to their nest, where they devour the elaiosome but leave the rest of the seed intact. Eventually, the seeds sprout in the sheltered environment of the ant nest. Nourished by the detritus there, the young plants experience strong growth and over time establish a new colony of Bloodroot. In this way, the cycle continues and the forest comes to life each spring with a concentration of unexpected color. 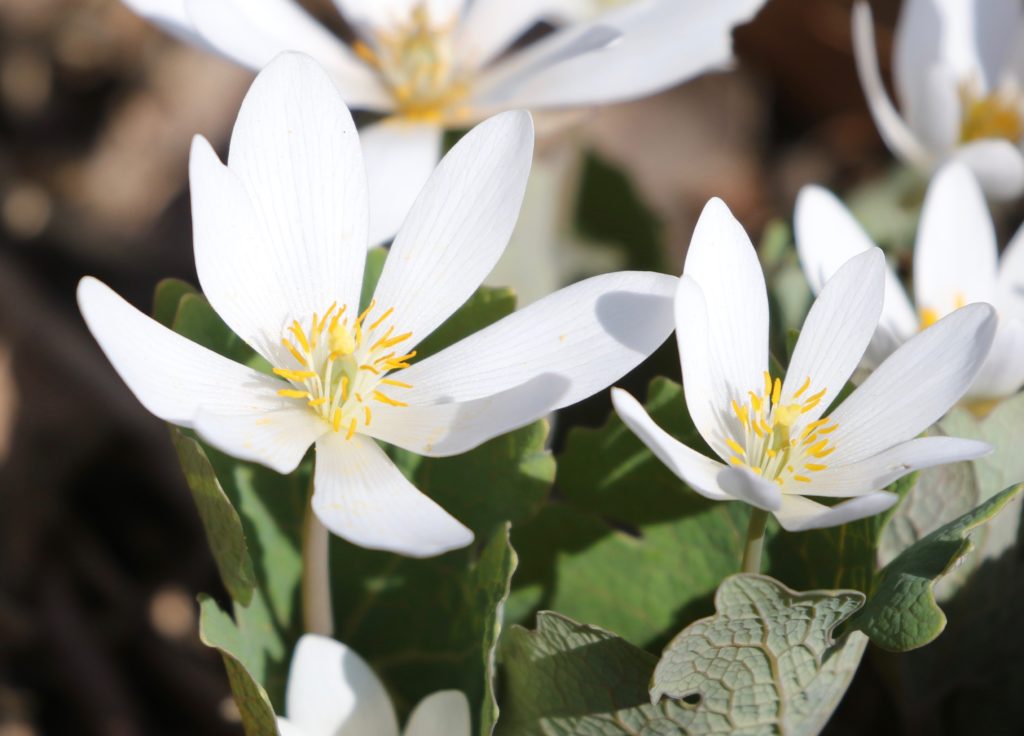