I was walking the Leslie Street Spit last December with binoculars in hand but no camera, when I found a Saw-whet Owl sitting in a spruce. The bird surprised me for two reasons. First, its size. All Saw-whets are tiny—on average, about eight inches tall—but this was the smallest, most fragile specimen I’d ever seen. Second, its position, uncharacteristically perched at the end of a branch, in the open, rather than close to the trunk, within the tree’s sheltering shadows. Saw-whets are known for their ability to disappear within an evergreen: 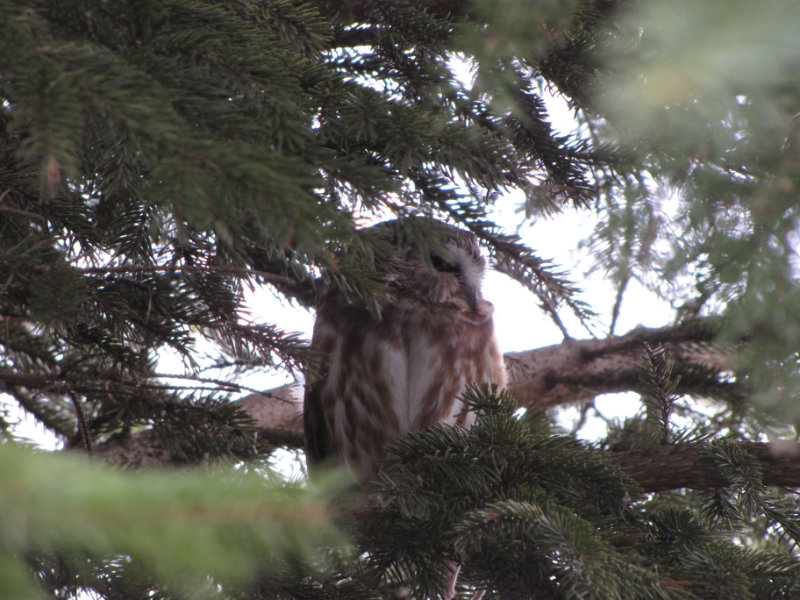 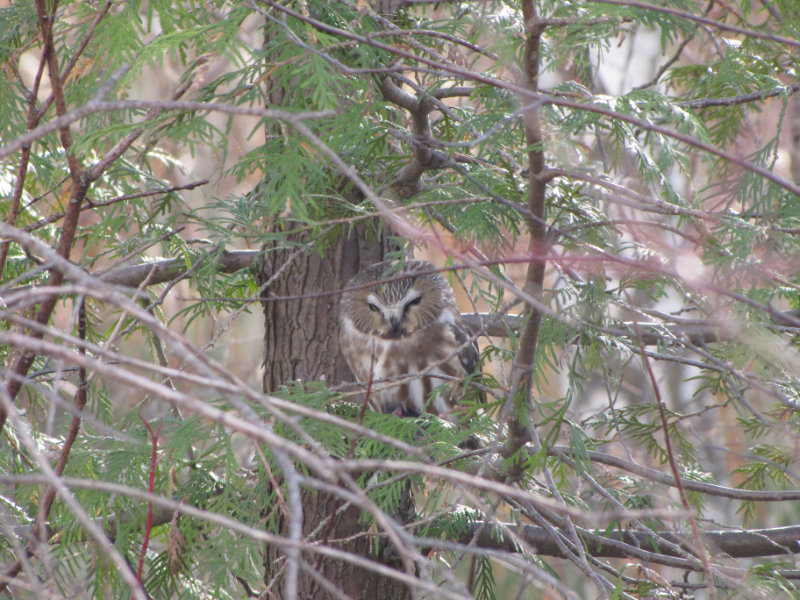 or to insert themselves into the thickest part of a shrub: 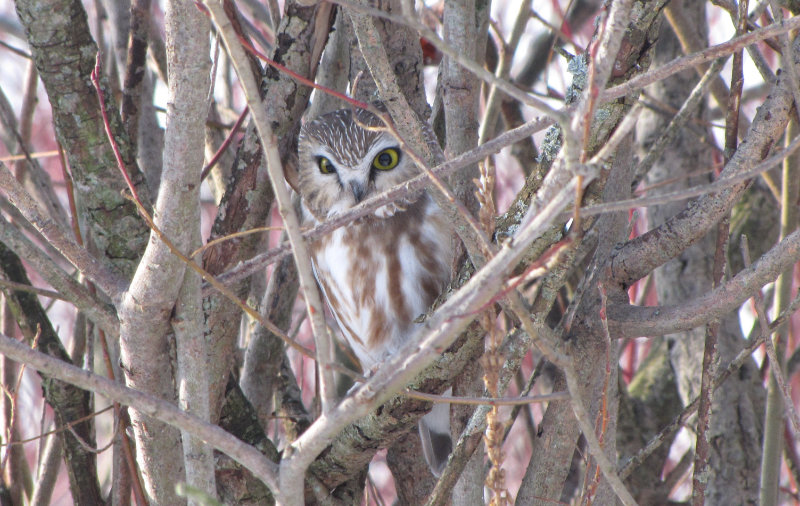 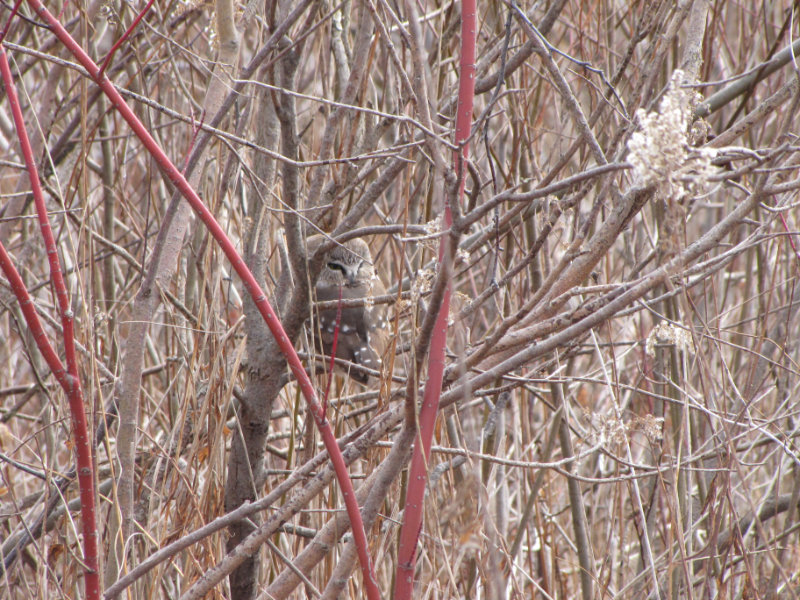 where they’re safe from the Goshawks that haunt the Spit from autumn to spring: 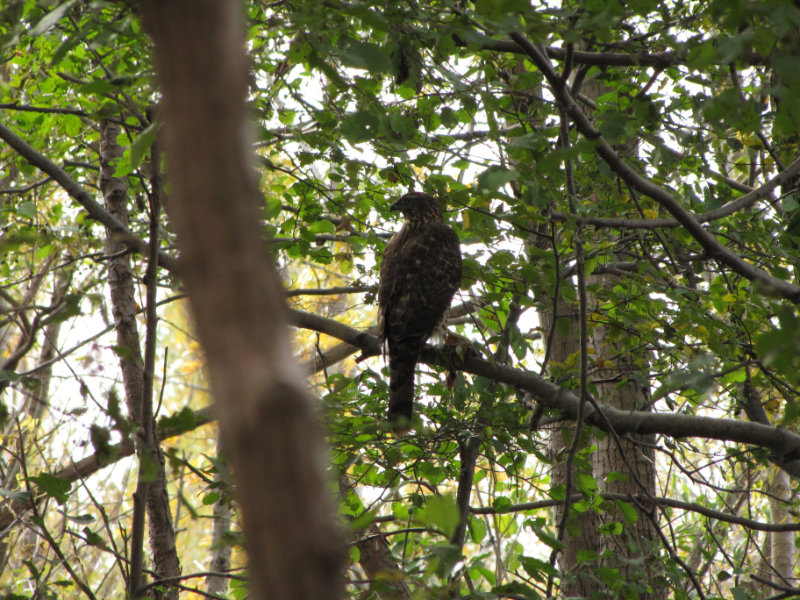 or from the Great Horned Owls that terrorize every other type of bird down there: 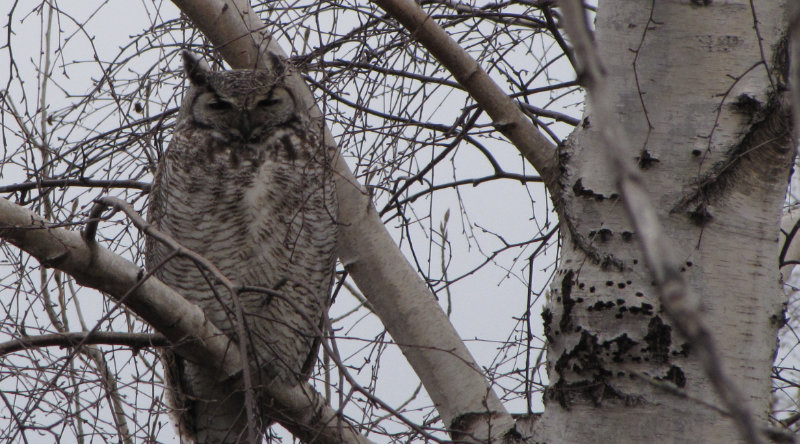 Both in size and position, the Saw-whet I saw in December made me think of a candle on a Christmas tree. A little precious, the analogy? Well, for my money, this owl’s yellow eyes out-flamed any candle that’s ever been lit. I wondered what the bird might be thinking, as it sat frozen on the tree limb, giving me the eye. Maybe it was sketching out its resolutions for the new year, making the old distinction between what it already knew and what it still needed to learn. What it already knew: that spruces make a great place to roost. What it still needed to learn: that part about moving in closer to the trunk, hiding in the shadows to avoid an attack.

I remember once finding the remains of a Screech Owl at the bottom of a fence post near Crowther’s Woods. The bird had been ripped to shreds, and the only remnants were one wing, the beak, and the thumbnail-sized heart. The same thing could have happened by now to my Saw-whet since it lived in the wild, inhabiting a world where deadly violence is a constant threat.

A few days after I saw the owl, someone gave me a book for Christmas, Aldo Leopold’s A Sand County Almanac. This classic account of life lived close to the land in one small corner of America had been lurking at the back of my brain for years but needed a kick in the pants from someone else to step forward and announce itself. The first line in the book reminded me of my reaction to the sight of the owl exposed on its tree limb: “There are some who can live without wild things, and some who cannot.”

I’ve often wondered why I find myself in the second category and can only assume it has something to do with mystery, the mystery that clings to everything wild. The mystery—as with the owl—of beauty and mere survival in today’s world, mysteries that continue to fascinate if only because they’re inexhaustible.